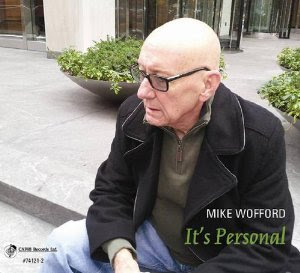 Mike Wofford first came to my attention as a key member of Shelly Manne's later configurations toward the later '70s-early '80s. He also played a key role as accompanist to Sarah Vaughan and Ella Fitzgerald. He has always struck me as pianist thoroughly embodying the bop and after ethos but very much in his own intelligent and soulful way.

That he sounds better than ever these days is clear from his latest, a solo outing called It's Personal (Capri 74121-2). And surely this is a very personal summing up of where Wofford has been and where he is, through an impassioned set of rather unexpected standards and memorable originals. I like how he starts with a striking voicing of Jackie McLean's classic "Little Melonae," which swings yet brings out at the same time the advanced sound of that composition. After so many years, the work still sounds startlingly fresh and Mike gets his best into it.

From there we get a lively program of Ellington-Strayhorn, Dizzy, Carisi's perennial "Springsville," prime Gigi Gryce, even a Talking Heads song, in a complete package that gives you a satisfying in-the-moment portrait of Wofford's fertile melodic-harmonic way in its full-strength glory.

Wofford's cumulative from the inside-out self-presentation moves, charms and strongly delivers the pianistic goods. It is certainly personal but its appeal seems to me nearly universal, insofar as any jazz can be that. Listen and you will hear what I mean, I hope.