Mostly Other People Do the Killing, Red Hot 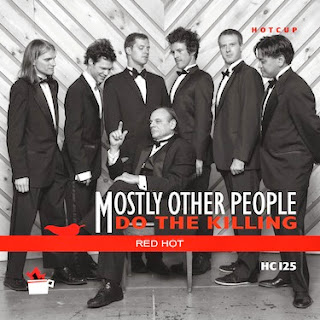 Mostly Other People Do the Killing is one of today's finest new jazz bands. They view the past with a healthy sense of humor born out of respect, then go on to create their own original world out of the building blocks of tradition. Their latest album does for old-time jazz what earlier ones have done for other styles: uses it as a springboard for a sound of total immediacy. Red Hot (Hot Cup 126) is the name of the new one, and as usual with their albums the first thing that hits you is the hilarious send up of album/publicity shots of the period represented. In this case we have one of those formal, stiffly posed shots of the band awkwardly hulking around the seated leader, who if possible looks even more awkward. If memory serves it looks like a photo taken of Fletcher Henderson's band back in the day? Either way it sets the tone for the music to follow.

For this '20s-early-'30s jazz tribute we have the regular band (and a fine one they are) of Peter Evans (trumpet), Jon Irabagon (soprano and C-melody saxes), Moppa Elliot (bass) and Kevin Shea (drums). They are appropriately joined by David Taylor (bass trombone), Brandon Seabrook (banjo and electronics) and Ron Stabinsky (piano) to flesh out the old/new sound with the basic sound configuration appropriate to the style.

But then as you might expect they take the style on as their own but in the process at (most) times rip into it/extend it in various outside ways.

It seems to me of all styles to parody the early jazz one is among the very hardest. It is so different than the various later incarnations which still get plenty of performance time today, styles that still are in our ears so to speak. And perhaps as a result the MOPDTK exuberance is less up front on this album. It's there, for sure, but a little more subtly so. Fact is, as much as MOPDTK have fun within the parameters of taking on the early ways, they also seem to be concentrating on bringing the essence of the era to light. The additions of Taylor, Seabrook and Stabinsky do much in that way, through Stabinsky in a cadenza or two and Seabrook throughout making some period-sympathetic but far outside statements. Dave Taylor sounds great as always.

The above is not a quibble, it's only pointing out how this album is partially a departure from the usual MOPDTK. The arrangements are much more thoroughly central to the music here than typically. They are funny but also a kind of old-new meld of a different sort and so there is much to absorb. In the end the absorption transforms to a thorough appreciation. This is very smart stuff--and a little bit less smart-arse than the norm, but yes also very smart-arse stuff.

That's something I love about the band. They go at it without the wax museum, jazz-is-the-classical music or classical-is-the-jazz music museum idolization. Whatever jazz is today, it can still be fun while also having greatness/cutting-edge currency. MOPDTK's Red Hot most definitely has both!