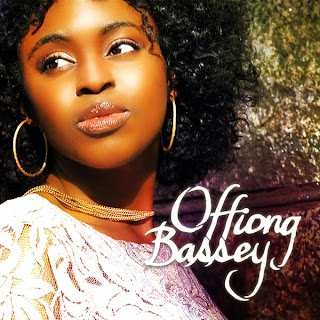 Today's CD is not the sort of thing that finds its way onto these blog pages that often. Mostly that's because I do not receive this kind of music that often. The world music releases I get in the mail and like have migrated over from the Guitar and Bass Blog to this site though, and so from time-to-time I'll be exploring such music here. The CD in question is by one Offiong Bassey. The CD is self-titled (Moonlit Media Group 0346).

Offiong Bassey is a singer who has a beautiful voice and uses it to very good musical advantage. She is of African extraction and takes full advantage of her rich heritage, with harmonies suggestive of South Africa, and vocal choruses and rhythms that often have a West African feel (her family is originally from Nigeria). The music is an all-original set of Offiong songs, well arranged by Blethy Emmanuel Tiegnon.

The music sometimes has a religious theme, and in the process combines contemporary Afro-American Soul/R&B, Hip-Hop/Rap, Afrobeat and otherwise African influences, not all coming to the fore in every number, but rather working together in various degrees depending on the song. It's music that has an accessible element throughout so that one might call it "radio friendly."

What hits me about her album is the rhythmic vitality of the music and the excellence of her vocal style. The songs have memorability too. There is both sophistication and a soulful directness.

It's bringing me a good deal of pleasure. Give her album a listen.