Raquel Bitton, Rhythm of the Heart 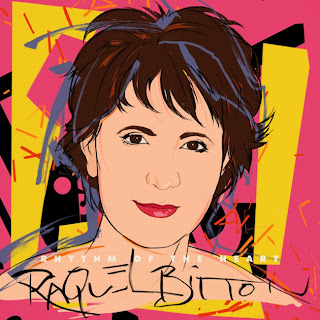 There is never a shortage of unexpected combinations out there in musicland. Here we have one today, singer Raquel Bitton and her album Rhythm of the Heart (self-released RB 4302-2). It's Raquel and a 20-piece Latin-cabaret group doing songs associated with Latin singer Tino Rossi. There are tangos, boleros, cha chas, sambas, bossas, merengues, danzons, all arranged nicely for the large group in classic '40s-'50s nightclub fashion. Rossi was especially a French sensation during his lifetime.

So Raquel singing these songs in French is definitely not a stretch. She has the voice of a chanteuse, well nuanced and well presented.

This is the sort of thing that left me at first hearing scratching my head, but a few listens later I fell into its spell and there I remain.

It's not exactly jazz, so don't expect a swinging band and lots of solos. There are strings, a Latin rhythm core and some nicely turned horn parts. Not jazz, no, though Xavier Cugat is not so far away when you hear it. What you get is total charm and a Cuban-French combination that sticks in your head after a while. And Raquel can sing.