SOS, John Surman, Mike Osborne, Alan Skidmore, Looking for the Next One 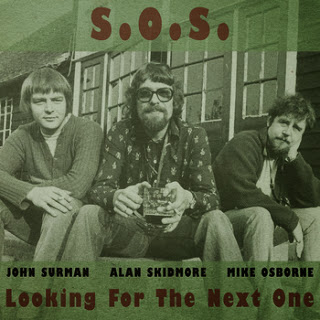 SOS only released one album during their brief but productive lifetime on the '70s British jazz scene. So the uncovering and release of another two full-CDs of music is quite welcome. That is what we have on Looking for the Next One (Rune 360-361). SOS was the product of a three-way collaboration between John Surman, Mike Osborne and Alan Skidmore.

All three were (and are) primarily known as saxophonists and of course all three have a strong presence in that department. For the set Osborne is on alto, Skidmore on soprano and tenor, and Surman on baritone, soprano and bass clarinet. One of the things that makes this trio unique though is the way Skidmore can switch over to drums, Surman to synthesizers and keyboards, and Osborne to percussion at any given point to give us a sound that has many facets and seems--and is--much more than a three-sax gathering.

The other factor that makes this group stand out is the compositional side of the performances. Skidmore, Surman and the trio as a whole construct very interesting compositional materials out of folk roots and more avant leanings. All serve to frame the improvisations fully and provide a continuous evolution of feels and moods. It's free music with a structured backbone, so to say.

The first disk is a product of two London studio dates from 1974 and 1975. Tony Levin joins the band on drums for the last two cuts to give even more fullness to the sound. The second disk is a live set well-captured at the Balver Hoehle Jazz Festival, Germany, from the summer of 1974.

The music is in full fidelity and contains much that is remarkable. The synth/keys and drums give the band the ability to stray into more electric territory--like later Soft Machine in some ways, and they do so to good effect. The three-horn interaction and individual soloing are impeccable and rousing, all that one could hope for from these three.

This is a release that opens up the listener to a new, fuller understanding of how talented the three were and how intriguing and exciting was the music they made together. They deserved more attention, surely, than they got as SOS back then. But we have this set now and we can fully appreciate them in some depth. Grab this!