The Road to Jajouka: A Benefit Album 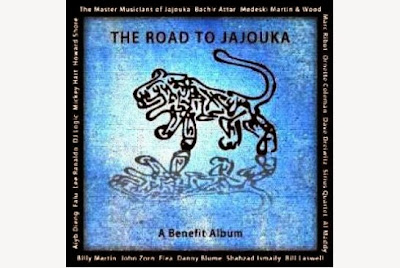 Ever since Brian Jones of Rolling Stones fame recorded and released an album of music by the Master Musicians of Jajouka, Morocco, the group of wind players, drummers, etc., has been an important part of the musical map we who take note of such things have in our heads.

They've had a number of albums over the years and also been collaborators in meta-fusion encounters, notably with Ornette Coleman. And now there's a new album out, put together especially as a benefit for them and the funds they need to keep on, The Road to Jajouka (Howe).

It places the Jajouka tonality and playing style in a variety of Euro-American rock and jazz modes and does so with consistent success. And, best of all, you'll be helping them by getting the CD. Ultimately you should hear an album of their music in the North African context, but that can be something you can do later. This one is a kind of great adventure of musico-cultural integration and stands on its own with some very different twists and turns!