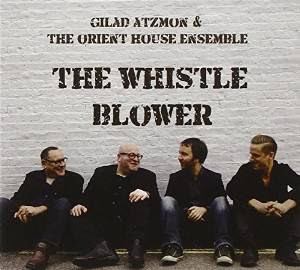 Gilad Atzmon & the Orient House ensemble graced these pages last July 23, 2013. I found that album interesting and unique. The new one, their eighth, is even stronger. The Whistle Blower (Fanfare Jazz FJ 1501) brings the band front and center with eight Atzmon originals. The band consists of Atzmon on soprano, alto, clarinet (along with his accordion, guitar and vocals), Frank Harrison on piano, keyboards and vocals, Yaron Stavi on double bass, electric bass and vocals, and newcomer Chris Higginbotham on drums and vocals.

The band is in fine shape, but especially noteworthy is Gilad's reedwork. He combines a uniquely throaty mid-eastern tone with some very soulful, virtuoso lining abilities one might call post-Trane, far enough away and well enough established in its own terms that the POST part is ascendant. He has the ability to string together rapid line outbursts that are impressive and moving, a rival to Rudesh Mahanthappa in that way though stylistically distinct. He has his own approach and some tremendous artistry

The combination of compositions of a modern jazz flair and always more-or-less middle-eastern flourishes makes for a band that sounds like no other. It is a musical entity very much on its own turf, but also a platform where Gilad Atzmon has a chance to shine forth beautifully. Frank Harrison gets some spotlight segments too and he captures an advanced pianism that makes him a worthy foil to Gilad.

The Whistle Blower is prime Atzmon. He is a force! And that presence glows, smoulders and burns here. Give him a listen, by all means!