Jon Irabagon, Inaction is an Action 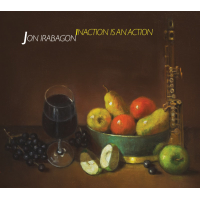 Today a look at one more recent example of the music of Jon Irabagon, Inaction is an Action (Irabbagast 005). Where the previous releases were ensemble oriented, composition and improvisation based, this one is devoted entirely to solo sopranino sax improvisations in an avant-free jazz mode.

The emphasis is as much on sound color and timbre as it is on line, on expression as it is on form (form follows inventive content, in other words).

For this, his ninth outing as a leader, Jon roams freely onto pathways of personal self-expression that utilize technique, subvert it and create it anew in unusual ways of sounding the instrument.

The avant history of the sax is channeled and renewed Irabagon style. From Trane and Ayler to Lacy, Braxton and beyond, Jon assumes a level of sound innovation and adds to it. There are arabesques of line sounding that identify themselves as personal and original but also as coherent partly by means of the avant tradition. There are pure moments of sound, then some things equally line and sound oriented.

It's not just a matter of creating new sound-colors and creating melodic form both inside and outside those parameters; it is ultimately a series of cohesive sound-images organized and framed by the parameters of slices of time, selections, pieces, eight in all.

Jon most certainly dwells in rarified territory for this album, more extreme perhaps than most of his previously recorded work, but connected to the whole of his artistry in its keen attention to timbre elements. There is no "jazz" saxophonist out there today who does not work out of a personal set of timbral possibilities. Jon is no exception, yet he can unveil a wider set of sound-color extremes than many and appears to take delight in interjecting them during the course of his soloing. Here that tendency is taken much further than usual, with the unaccompanied solo format lending Jon an unlimited freedom he makes great use of.

And then when he turns to episodes that zero in on line extensions, as in "Ambiwinxtrous," he phrases in unusual melodic clusters, then in turn phrases the extended techniques that follow in their own way, combining clusters of tone and sound as part of a totality of phrased gesture.

In the end Jon pushes his own personal boundaries of the limits of expression further beyond what we ordinarily hear from him in recorded form. In so doing he again establishes himself as an important and breakthrough player in the avant sax mode. Perhaps he will treat us to some of this outside playing with an uncompromisingly out ensemble in future. If so I will certainly want to hear it.

In the meantime we have this unaccompanied flight to the nether worlds of expression. Jon is essential listening for what's going on today. He pushes the envelope especially and satisfyingly on Inaction is an Action. Danger, bare wires? No. No danger here. Just keenly insightful explorations.