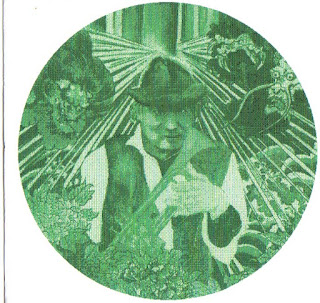 One thing you can be sure of when it comes to releases on France's Improvising Beings label. You are NOT going to get anything that has been watered down. You are going to get something on the edge of modern avant improvised music. This is most certainly the case with their album by the group Leena Circus with Itaru Oki, Zanshin (Improvising Beings ib 45).

It is a dedicated quartet on a cosmic jaunt into the nether regions of space, free music that manages to be very electric and non-compromising. It is a well-rounded assemblage of Itaru Oki on trumpet and flugel, Antoine Letellier on electric guitar, sax and trumpet, Nicolas Moulin on electric guitar, and Guillaume Arbonville on drums.

Oki is the especially accomplished improvisor of the four, with excellent inventions here. But then the other three make a kind of joyful noise that gives this music a grand expanse, with the electricity of the guitars, the continual outward orbital thrust of the drums, and the sax and second trumpet effusions of Letellier when he is not playing the guitar. There are times when the band occupies a somewhat cavernous aural space and the music becomes soundscaped. And there are other times when there is a more-or-less directly dry matter-of-fact sound. But either way Lena Circus makes a focused and consistently interesting go of it all, sometimes a kind of concerted free space for Oki and caverned psychedelicized "orchestra," other times a equal four-way ensemble sound.

It is music that gains traction as you hear it more than once, like the best kind of advanced music. It got my attention more each time I heard it. And in the end I must say that I ended up admiring the music a great deal.

Try this one out. Give it your attention for at least several hearings and you will gain a good deal to interest you, I think.