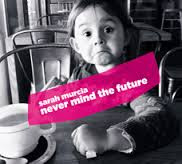 What a "standard" is today is potentially quite a bit different than, say, what was on John Coltrane's Prestige "Plays Standards" album that was recorded nearly 60 years ago. Yet some jazz artists stick to the same old masterpieces that were well-enshrined by the time Trane addressed them. Other artists, however, have opened the floodgates of songs made between then and now, and the results are as potentially differing as they were then, only of course the artistic choices have grown in many ways.

So what is a standard except a song that we feel the need to resurrect and in some way enshrine, interpret and infuse with personal creativity?

So what about the Sex Pistols? What about their iconic punk album "Never Mind the Bollocks"? The songs there changed around plenty of heads and looking back, they were probably the best of the movement. So if somebody did a rethinking and reinterpretation of those songs, what would you think? The fact is, Sarah Murcia did do just that, on the new release Never Mind the Future (Ayler 149).

These are rather brilliant transpositions of the songs. They are de-punked, vocally and instrumentally, and given careful articulation so that the bleak lyrics, the protest against status-quo and limited prospects comes through all the more for it. The music has an avant jazz-rock originality that one might call post-Mantler, with an emphasis on post. Really this is a new sort of standards album, in content and treatment.

And as that it breaks boundaries and describes worlds we may all be experiencing without the least irony now....though the words can still shock, especially when sung-spoken plainly. Murcia connects with the Sex Pistol's punk essence and reflects on it with brilliant arrangements, really, and creative performances as well.

I am not one to tell people what to do, but you might find this album something that very much speaks to you, and very artfully so! Thanks Ayler Records for continuing to keep us all on the cutting edge!! Get this one and keep the label alive.