Susana Santos Silva, Torbjorn Zetterberg, Hampus Lindwall, If Nothing Else 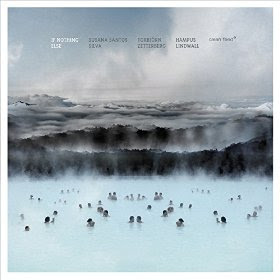 What is next? Many things. One of them Susana Santos Silva, Torbjorn Zetterberg and Hampus Lindwall and their album If Nothing Else (Clean Feed 348). This is "spooky" music, to use a rather non-technical term. It is spooky in its very own way. The music is collectively conceived by the trio and played by Susana on trumpet and flugelhorn, often as if from a cavernous distance. Surrounding her and supplying their own resonance is Torbjorn Zetterberg on double bass and Hampus Lindwall on organ.

The three together create a very atmospheric sort of new music with an improvisational component. It is not overtly jazz oriented much of the time, though it has expressive power and does make a nod at times to jazz roots. The music often uses long, sprawling washes of sound which take advantage of the organ's infinite sustain, carefully chosen trumpet sonics and the full scope of pizz and bowed double bass.

Each of the eleven segments is a world unto itself. Ms. Silva has a definite virtuosity in her ability to unleash trumpet-flugel timbral complexes, whether muted or straight, within organ envelopes and bass resonating. And Torbjorn has a varied, freely articulated role to play that melds both with the organ sustains and trumpet expressions to give added bottom and noteful additions. Lindwall is called upon to give complex, uncannily spacial zone modules.

But it is not all sustain-oriented. Listen to "Stop Chords" with its insistent, manic, unrelenting sounding of staccato organ chords in strict periodicity while bass bows and scrapes and trumpet unleashes a series of utterances, the two in absolute contrast anarchically with the organ's absolute hegemony.

Or there is "Power Walk," a possessed sort of outside walking on bass and organ that takes the frenetic edge of rapid-fire but chordally ungrounded "swing" and pits Silva's horn "soloing" on top of it.

The music is striking in the end. I cannot say it sounds like anything else, truly. It is ultra-contemporary, ambient yet jarring in its refusal to lay down pastoral carpets, an expressive hell of the best sort, mood music for unsettled times, you might call it.

It is a signpost directing us through some bleak terrain, and doing so in ultra-artistic ways. Silva plays trumpet in arresting fashion, her trio mates give us startling combinations and we are left fascinated with the possibilities unleashed.

The conceptual-compositional frameworks of the trio's music get fleshed out by the three in unusual but impressive and effective means. It is a most unexpected treat and brings you to full attention if you allow it space to unfold. I am quite surprised and pleased by the album. I heartily recommend it for you avant stalwarts. It has the animation of the dramatic gesture, the world opening contrasts between continuities and discontinuities. It is art!