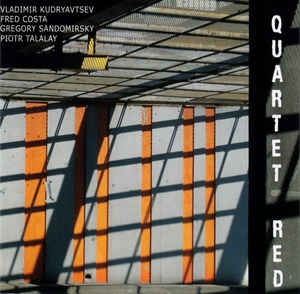 The quartet plays a present-day kind of improvisatory Freedom Jazz that is in a line of evolution from the '60s innovators. Fred Costa has a great big tenor sound that reminds slightly of Gato Barbieri in terms of the harmonic-rich texture of his notes at times but otherwise strikes out on an original path. Gregory Sandomirsky plays high-rolling piano that incorporates the Jazz Tradition in good ways. There is a bit of stride on "Farewell Coctail" (spelled that way) along with key centered romp riffs and extended technique energy forays. Both the tenorist and the pianist sing and scat a bit and one of them sometimes sounds slightly gruff like Tom Waits but it all fits the objectives of the music at hand. They are "band vocals" more than some bid for commercial airplay. And the singing does not intrude but blends well with the overall sound of the quartet.

Vladimir Kudryavtsev on acoustic bass and Piotr Talalay on drums give us wide ranging freedom both in and out of time and play fittingly throughout.

Overall, all four as a quartet sound adventurously like themselves on this set.

According to the liners it all started out as a few gigs with tenor, piano and bass beginning in 2015. Drums were added for the Moscow tour late in 2018 (though apparently Talalay had played with the three off and on for 15 years) and this recording was made as a part of that.

After hearing Quartet Red some six or seven times I must say it sounds very good to me. It's a fully spontaneous set but shows how free players very familiar with each other's style can catch on quickly to various grooves and open-ended flings with a sureness born of familiarity and talent. Good one!
Posted by Grego Applegate Edwards at 7:09 AM No comments: 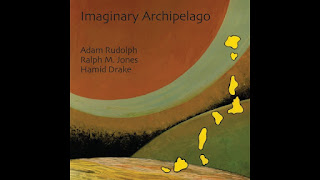 It is not the sort of music that lends itself to navel-gazing musicology though it may be just the thing for a personal introspection. It is music that sounds well and wears well. It repays the effort you put into listening, which is what we should expect of any new music no doubt. So I do recommend this one. It is very much a now expression and we very much need that now. Listen.
Posted by Grego Applegate Edwards at 7:02 AM No comments: