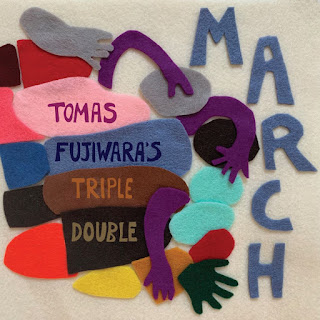 You can expect too much from life for sure. And then in time you need to adjust what you assume and recalculate what to do next. When it comes to music though, there is not always a need to adjust to that in any given year there are good and/or excellent new recordings on the horizon. And so the scene never grows old if you keep up with what is happening at any given moment.
One of the happening things right now is drummer Tomas Fujiwara's Triple Double and their album March (Firehouse 12 Records PH12-04-01-35). Like with Ornette Coleman's classic Free Jazz lineup there are two of each instrument, for in this latter case a kind of double trio, rather than the double quartet of Ornette's.
So we have leader Tomas Fujiwara on drums, vibes and compositions (add Cleaver as co-composer for last cut), and Gerald Cleaver on drums. Then there are the electric guitars of Mary Halvorson and Brandon Seabrook. And finally we have Ralph Alessi on trumpet and Taylor Ho Bynum on cornet. Of course they can be heard as three pairs of two, a kind of double trio. The first consideration is that they are important artists on their instruments, critically acclaimed and appreciated in the Jazz Improv underground. If you know the scene you will doubtless recognize and be somewhat familiar with the players. if not even more familiar.
This is their second album, the first dropping into our ears in 2017, so it has been a while and the band has had a chance to cohere nicely. I am afraid I missed the debut, and here the well-turned compositional frameworks that Tomas gives to the band on this new one helps steer an innovative path for the talented six and sets things up for loose swinging and rocking freedom.

The album was recorded in late 2019, right before the pandemic hit us all and put a halt to most of the live music possibilities for a while.

Alessi, Seabrook and Fujiwara formed the nucleus for the doubling into Triple Double. And then in time came the full double three coupling.  The first album came about in 2017, when the full roster was relatively new to each other as a whole. Now that we have March we can gauge the full growth of the outfit on its second-go-round. And that is a very good thing indeed.

The pairing allows as in this second album a myriad of groupings in various additive and subtractive modes. So "For Alan, Part II" (dedicated to the late drumming icon Alan Dawson, who was Tomas' mentor and teacher in his early days) is a wide-wheeling happy grooving drum solo duet between Tomas and Gerald, one of the finest such things on disk.

The opener, "Pack Up. Coming for You" starts with a trio of Fujiwara, Bynum and Halvorson in a 7/8 open-ended groove, some time later the second trio possibility comes to the front, that is of course Cleaver, Seabrook and Alessi. Then in the last section we are treated to the full six going at it. In this way we are prepared for the shifting interactions of the six and the creative frisson they create regardless of who is combined at any time.

In the end it is a fully engaging program with the inventive originality of each running up against any and all in turn. After a few listens you come away from it with an appreciation for the effective creative leadership of Fujiwara, his compositional dexterity and the imaginative responses of all concerned. If you are like me, from first finding quite interesting the unusual lineup I put the album on and, in the end, found that all my hopes for such a lineup were justified. To get an idea listen to "The March of the Storm Before the Quiet of the Dark." It is a fine album indeed, a highlight of open-ended jazz groups for this now relatively new year. Bravo!

Posted by Grego Applegate Edwards at 11:31 AM No comments:

Carla Diratz & the Archers of Sorrow, The Scale 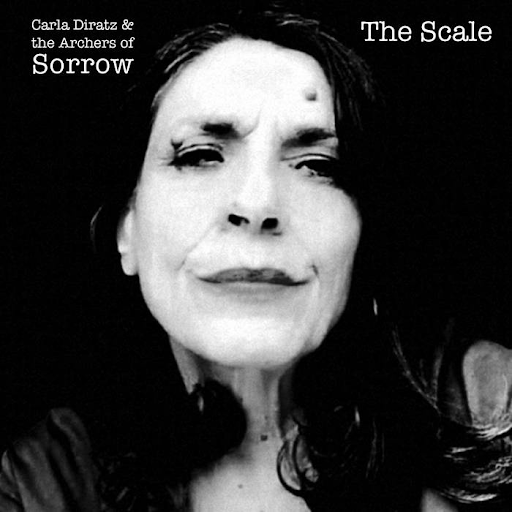 The good thing about social media to me is the musicians, artists and good people you might not otherwise meet in your life. So Carla Diratz has been that to me, a dear friend but even if not an artist-vocalist-songwriter of a deep sort. She and the Archers of Sorrow have a new one out entitled The Scale (Discus 124CD). It is another gem in a long string of such things.

If you appreciate the Rock-Art song world of such folks as Jack Bruce and Robert Wyatt, along with the kind of adventure the Soft Machine was up to in the original years, well all I can say is that Carla and her compadres are yet another example that perhaps has not gotten the recognition she and they deserve.

So I will not quote from them (you will hear them with a listen)  but an important component of all this is Carla's poetic lyrics. They unfold complex image-thoughts.

Then to the music itself? Carla is a vocalist of absolute originality, just right for the tempered cold-heat of her songs. Then there are the core instrumentalists who form especially the foundation for what goes on. There is Martin Archer who realizes much that is prime on keys, saxophones, clarinets, recorders and software. And then Nick Robinson makes an important presence felt on electric and acoustic guitars, loops and a little keyboard as well. Then we have good showings from a rhythm section of Dave Sturt and Adam Fairclough on bass guitar and drums, respectively. Charlotte Keeffe on trumpet gives us some very nice improvising and then finally there are background vocals by Jan Todd and Julie Archer.

The music has a kind of prog art song aspect that is in its own way distinctive and a joyous listen and there are avant jazzy elements too. I think the best indication of the originality of it is that categories are not sufficient to portray what you will hear.

I give this my highest recommendation in the way it hits me as a beautifully complex, original matrix of music to savor.

Posted by Grego Applegate Edwards at 10:30 AM No comments: