Muhal Richard Abrams, Soundpath, The Warriors of the Wonderful Sound 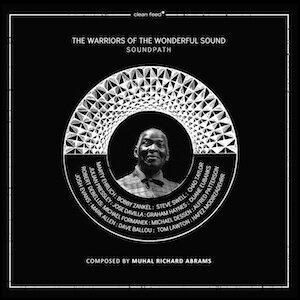 As I write this composer-pianist AACM founder Muhal Richard Abrams has been gone from us some four years. Yet of course his music lives on and sounds as wonderful as ever to me. With the upheaval of the Pandemic I may have gotten to an album of his big band music a few months later than I should have. Nonetheless the Soundpath Big band doing his composition The Warriors of the Wonderful Sound (Clean Feed CF556CD) transcends time and feels as evergreen as anything as I listen again this morning, so "never too late" seems to apply.

Soundpath is a talented gathering of Avant Jazz all-stars, a choice selection of improvisers and readers, all with the proper grasp and brilliance to make this 40 minute score come alive nicely and swingingly. Marty Ehrlich sounds great on alto and he conducts the whole as well. Bobby Zankel also gives us significant altoing and puts together the whole as the Musical Director. Steve Swell comes through as always with some wonderful trombone, Graham Haynes does his cornet-ing with excellence and you cannot beat the rhythm team of Tom Lawton on piano, Michael Formanek on bass and Chad Taylor at the drums.

The whole band is well rehearsed and on top of it all. The many-faceted score gives us the bite of Modern harmonies and multilayered contrapuntal Jazz in the open zone.

It is a marvelous example of the Abrams ultra-musical stance, his detailed approach to large group music along with a goodly space for improvisations that send the music forward.

This one is a must have for all Abrams enthusiasts, Modern big band appreciators, Art Jazz proponents etc. You cannot go wrong with it, in my opinion. Bravo!

Posted by Grego Applegate Edwards at 9:00 AM No comments:

Rodrigo Amado, This is Our Language Quartet, Let the Free Be Men 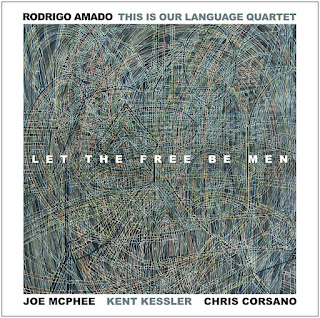 Over the years I cannot remember a bad Rodrigo Amado album. They are all worthwhile. His tenor is always on top of things, animated, inspired and articulate. His bands are well chosen and committed. The freedom of expression is always to the point and focused. And the sequence is ever flowing, exciting.

There is a new one with Rodrigo and the "This is Our Language Quartet," an all-star gathering of Rodrigo with Joe McPhee on trumpet and soprano, Kent Kessler on double bass and Chris Corsano at the drums. The album is titled Let the Free Be Men (Trost Records TR208). It paces nicely between barn burners and more slowly unwinding trajectories. The tenor-soprano, Amado-McPhee collective improvs have a beautifully energetic two-way dynamic, or rather of course four-way when it is rhythm and front line charging forward together.

Amado's full throated, gritty and edgy tenor sound is a wonderful thing to hear and Joe McPhee of course brings his own edge to his playing, whether soprano or trumpet. Kent Kessler sometimes joins the two with a harmonics laden bowing that sounds just right. His pizzicato punctuates everything well as always. And then of course Chris Corsano brings his full spectrum of drum sounds and velocities to keep things stoked. He kicks the music up several notches when it seems right. So it all grabs onto your ears and one goes away happy.

The album carves out a stylistic drift for a kind of state-of-the-art freedom we come to expect from Rodrigo.

If you are new to the Amado art or an old appreciator, either way this album fills your ears with good things from start to finish. You do not want to miss it. Yes indeed!

Posted by Grego Applegate Edwards at 9:51 AM No comments: 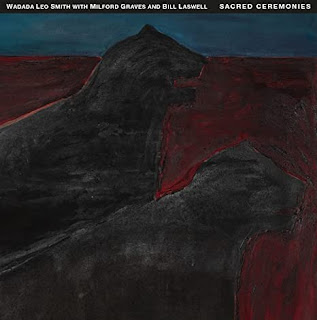 An artist of stature grows in time if he or she has the time, the opportunity and of course the vision. Trumpet master and composer Wadada Leo Smith is an excellent example. There has been a lot of water under the bridge since those early Anthony Braxton Trio recordings with Leroy Jenkins. Wadada grew into a formidable band leader and composer, then there was the electric Davis tribute Yo Miles! that saw him encompassing and going beyond that initial open electric field.

And after all that great music Wadada has apparently been synthesizing where he has been and now we hear a kind of wrapping of it together in a substantial three-CD improvisational box titled Sacred Ceremonies (TUM Box 003).

Each CD maps out a series of free improvs. On CD1 Wadada Leo Smith's trumpet melds with edgy, rolling and  tumbling drumming from the late Milford Graves. CD 2 features Wadada and Bill Laswell on electric bass. Then CD3 brings all of them together in a climactic set of three way expressions.

Wadada maintains top form here, quite apparently inspired in turn by Milford and then Bill, then all three. Graves gives us a prime slab of his open stance rolling freetime, often divided into cymbal-bass drum washes that contrast in advanced terms with Graves' special independent and poly-complicated trap drum lines. Put it all together and it gives Wadada and Bill a multidirectional urging forward where there are a great variety of things that can and do work atop the drums. with a vast array of possibilities that Wadada and Bill can react to. And react they do with some beautifully open phraseology.

For all the successful dates and appearances he's made on electric bass, we sometimes might forget that there is a good reason why he fits into a great many possible combinations--because he is ever inventive, forward flowing and always somehow right with what he fashions via-a-vis the musical now.

Wadada plays some of his strongest lines here. It is as if he has had the time after Yo Miles! to incorporate and synthesize that aspect  of his playing into the wider Wadada model of free playing.

Given the sad loss of Milford this past February, the set becomes that much more precious in how it gives us a long listen to the Graves drumming way near the very end of it all. But this is regardless crucial for the three-way dialog that gradually and luxuriously unfolds across the three disks.

It is a session to linger over, something to appreciate in its unrushed focus on the evolving moment, in its way a masterpiece of free invention. Wadada continues to be serious business, a master among masters. Check this one out for sure. And RIP Milford Graves.

Posted by Grego Applegate Edwards at 10:31 AM No comments: