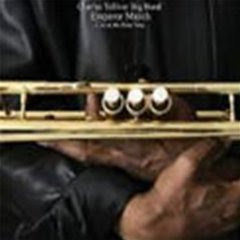 Charles Tolliver is one of those trumpet/bandleaders whose relative eclipse over time is, from a musical standpoint, inexplicable. I will not attempt to fathom why in this space. Rather, I would like to celebrate his last Half Note release, Emperor March: Live at the Blue Note.

This is excellent big band jazz with the emphasis on what Tolliver has always been into, which is the hard bop/post-bop nexus of Trane, his sidemen and followers, and of course, Tolliver himself. The band is hot, the music steams and Tolliver shows himself still vital. This belongs with the very best big-band releases of last year. Much ink has been spilled about it so I will only reaffirm. Dig in and dig yourself out of the winter doldrums with this one.
Posted by Grego Applegate Edwards at 4:59 AM