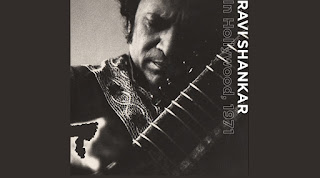 Ravi Shankar was at the peak of his artistic powers when he invited a select group of friends and colleagues to his home in Hollywood for an informal concert on June 12, 1971. The music was captured in good fidelity on tape and we can at last hear it some 45 years later on Ravi Shankar in Hollywood, 1971, a two-LP or two-CD set now released as Northern Spy 073.

With him is his then ever-present tabla accompanist, the great Alla Rakha. Their long developing rapport is in full flower as they explore the possibilities of Raga Vibhas, Raga Paramashwari (composed by Shankar), a Dhun, and Raga Sindhi Bhairavi. The interplay between the two is something to hear, as it most always was in those days. Ravi himself is inspired to delve deeply and brilliantly into each raga with the kind of insights that made him one of the greatest sitar exponents in the history of the music.

Heedless of time constraints and fully engaged in the intricate unfolding of the improvisations, Ravi and Alla Rakha provide us with one of those special concerts expressly designed for appreciation by Hindustani music cognoscenti.

It is a wondrous moment that all who appreciate great Indian classical in general and Ravi Shankar in particular will welcome with joy. It also serves nicely to those who may not know his music well and would like to hear something exemplary.
Posted by Grego Applegate Edwards at 6:08 AM