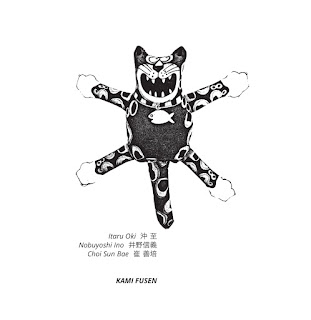 It is perhaps a somewhat unlikely pairing of two trumpets and bass, but even on first listen you hear the rightness of the three and their inspired interplay. It was recorded at a single live appearance in Japan that went forth without rehearsal. The compositional elements by Oki and Ino, and a standard or two are taken without a hitch and the improvisations travel to freely articulated yet centered and weighted territories.

Ino's bass playing is something to listen to closely. The two trumpeters offer dramatic contrasts in their sound and attack. All three give us something much more than three singulars, Rather three definite plurals come at us and demand our happy attention.

It is one of those one-off gatherings where a natural kinetic electricity is in the air. It is a fine listen, well worth your trouble if you want something open and brilliant.
Posted by Grego Applegate Edwards at 6:50 AM