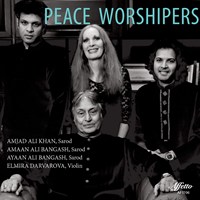 There is a special place in my heart for both Hindustani (North) and Carnatic (South) Indian Classical Music. I grew up at a time when there was an intersection of Indian Classical and Rock, much to do with Beatle George Harrison studying with the great Ravi Shankar. It opened up vistas for those who took it seriously, and I did. The rest has been a joyous exploration for me and I am grateful to have been present when it entered Western cultural consciousness and allowed us a pathway to its full presence.

This new recording, Peace Worshipers (Affetto 1706), by arguably the greatest living Hindustani exponent of the Sarod, Amjad Ali Khan, and his colleagues Amaan Ali Bangash and Ayaan Ali Bangash on sarods and Elmira Darvarova on violin is very worthy of our attention. It brings to us the excitement of Jugalbandi (duet improvisations on a Raga structure) and the freewheeling compositional possibilities both inherent in Jugalbandi and beyond.

Most of the music is based on a particular Raga and composed by Amjad Ali Khan, There is also a recomposition of a Bulgarian folk song by Elmira Darvarova.

Davarova is a very fine violinist who fits in well with the Indian classicists. She and Amjad turn in some beautiful performances. And the ensemble as a whole engages in exciting and beautiful exchanges. Some of it reminds of Ravi Shankar's elaborate compositions that went into synchronized variations and thematic expositions based on but travelling beyond Indian tradition. Other have the subtle Jugalbandi interplay.

It is music in every way worth your time.  Amjad Ali Khan brings brilliance to our ears in his lively and beautiful compositions. And the playing is all you could hope for. This is a stunner! Grab it by all means.