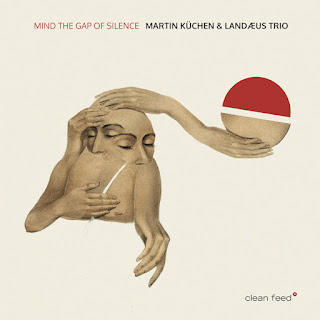 Saxophonist Martin Kuchen has been making some joyful Jazz noises over in Europe for a while now. I've covered him on these pages from 2009-2017 (type his name in the search box for reviews) and now he is back with something recent in company with the Landaeus Trio for an album called Mind the Gap of Silence (Clean Feed CF552CD).

It is a full set of structured freedom based on springboard Kuchen compositions that have a kind of folk elementality (minor mode at times) yet an expressive thrust to set the band on its way, six times in all, recorded before the Pandemic, 2019 in Sweden.

Martin mans the soprano, alto and tenor saxophones with a mastery and sureness that pulls the music forward. He has a full throated, overtone laced sound that at times recalls favorably Bechet's soprano and perhaps early Ben Webster tenor, only without a lot of vibrato.

As I write this morning I am listening to the last track, the final "Sounds & Ruins." It manages to situate in a place somewhere between a rhapsodic later-Trane-meets-Ayler, with maybe a bit of the thrust of an Archie Shepp, and ultimately pronounced roots that hearken to our deepest universal folkways.

The opening "Sorkifsta" is memorably minor-folk balladic and plunges us into worthwhile musical territory that keeps up throughout.

Matthias Landaeus on piano is a carefully but soulfully lyric presence that gives Martin a productive foil and contentful response throughout. Double-bassist Johnny Aman gives out with a very whole expression, a woody tone and consistently fitting solo and accompanying thrusts. Drummer Cornelia Nilsson can push a freetime percussiveness or a nicely loose swing, and it all sounds right, always.

"Old Harriot Hat" is the most overt swinger of the bunch and it brings out the extroverted best of the quartet, especially Martin and Mathias. Martin could be playing with Hawk on 52nd Street for that dramatic swing-bop largeness you hear with such immediacy. And Mathias bounces along himself into very solid swing territory. Good show!

The title cut has balladic torque and further shows us Kuchen's lively retapping of roots.

"East Hastings Satian Slow Stomp" gives us an almost hymn-like testification and some very soulful soprano along with a nicely brushed drum solo. I still enjoy listening to drums and bass solos, so thanks for some nice ones on here.

"Love, Flee Thy House" continues all with a very intense soprano and a kind of post-Trane rhapsody followed by a free-riffing undulation that grows dramatically in intensity for a definite statement of high expression.

After  passing through the entirety of this album a bunch of times I must say it gets me nodding and smiling,  smiling and nodding. Everybody puts it together here both indivudually and collectively. It is one of the best I've heard from Martin so of course I recommend that you check it out.

Posted by Grego Applegate Edwards at 10:24 AM