Giuseppi Logan, ...and They Were Cool 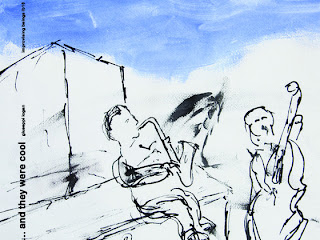 When an artist is off the radar as long as Giuseppi Logan was, it is understandable if his comeback is subject to a certain amount of fits and starts. That has been the case to my ears but in his new one ...and They Were Cool (Improvising Beings 16) he is firmly in his zone. Giuseppi fronts a quartet for this one in a program of freely spinning improvisations. There's Giuseppi on alto and piano, Jessica Lurie on flute and alto, Larry Roland on bass and Ed Pettersen on electric guitar.

Now certainly Maestro Logan has never been known as a high-velocity technician and he is not that here. But he is most certainly back to full form as a free thinking, original sounding avant reedest. And his bandmates complement him contrastingly and appropriately, Jessica as an excellent front-line reedest who stylistic remains very much herself yet meshes nicely with Logan, Ed Pettersen as a very stimulating electric presence that still maintains a group balance while he brings his own line and texture weaving to the table, and Larry Roland in a nearly classically free role of foundation builder and expansion creator.

This is a new, reconstructed Giuseppi that nevertheless reminds us why he was interesting in the first place. He is brashly out in a starkly affective way here and his bandmates do much to further his vision. New-thing-ologists, take note.