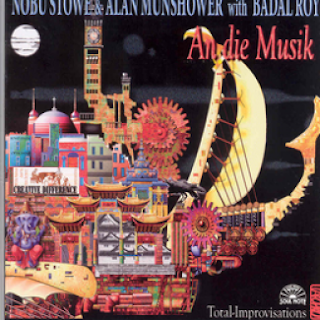 Another something different today, from the batch of CDs Nobu Stowe kindly sent. It's him with drummer Alan Munshower and Badal Roy, the tabla virtuoso, in a program of total improvisations from 2006 called An Die Musik (Soul Note).

This is almost free rock, you could say, free acoustic music for piano, drums and tabla in a straight-eight vein. Not that it is brimming over with rock riffs, backbeats or other tell-tale insignias of the rock world. It isn't. In fact it states a series of free spontaneities centering around Nobu's piano, occupying its own post-Jarretian landscape where the extemporized harmonic underpinnings are often insistently stated and improvised upon in conjunction with the fine drumming and, when Badal is present, the tabla setting up open yet structured grooves that play counterpoint to the pianistic presence.

The music breathes well. Nobu has consistency of inspiration yet can be unpredictable in where he will go. Rhythmic drive serves as foundation, as the constant, and the drums-tabla interlocking against the piano stay at an inventively high level throughout.

It's a different sort of date, by no means perfect (which is quite understandable given the no-safety-net total improv situation), but enormously stimulating once you get on its level. I know of nothing else quite like it. The three are integral to the result and there are virtually always interesting, multiple levels of interaction to focus in and out of, the rhythmic, the pianistic left-hand grooves, ostinatos and overall harmonic shifts coming about in tandem with the rhythm, Nobu's melodic-improvisatory right hand ...

It's a fascinating disk, with many rewards to discover if you approach it with an open mind. Listen to it a few times and you will see, I think, what I mean.

Posted by Grego Applegate Edwards at 7:19 AM