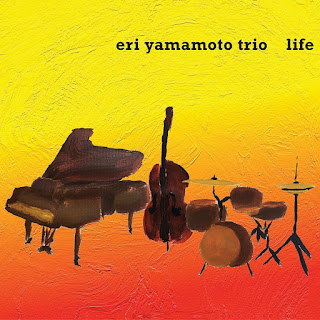 All but one of the compositions on the set are hers, with one by Ikuo. They have a great variety, from a jazz waltz to a jagged figure to improvise off of to a sort of zombie rocker, there is whimsicality but understandably a definite seriousness of purpose in all of this.

Eri's piano style has harmonic and melodic complexity--she may have been influenced by, say, Bley and Tyner, yet there is a great deal of originality on display, even a bit of humor.

Altogether a winner of an album!  Bravo Ms. Yamamoto!
Posted by Grego Applegate Edwards at 6:27 AM