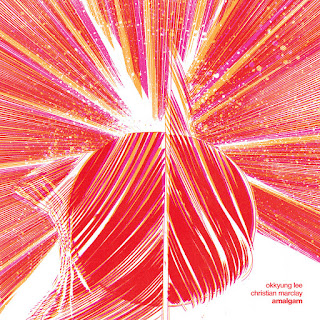 The album was captured live at Cafe Oto and nicely expresses the creatively spontaneous inspiration of shining in the moment.

There is a beautifully open rapport between Lee and Marclay that involves an acute awareness of the sonoric possibilities of color-timbre discourses in real time. The noise element contrasts with notefull textures dramatically throughout the set.

This is a vibrant contemporary example of the exceptional flowering of new music improv that has taken place in this century thus far. As talented individuals encompass a greater and greater spectrum of  sound poetics we begin to see a dramatic increase in spontaneous expressivities and at times a great distance between the language of such performances and earlier "free" vocabularies.

A brave new sort of world confronts us on the best of such event gatherings. Amalgam reminds us how far we have come, how Lee and Marclay are exemplifying and pointing towards new sonic frontiers.

Bravo!
Posted by Grego Applegate Edwards at 5:37 AM