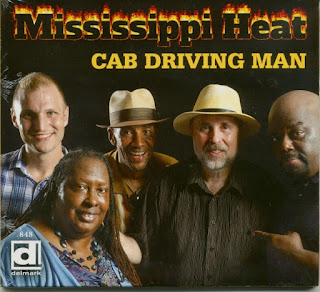 On the playlist for me right now is the new album by the blues outfit Mississippi Heat, Cab Driving Man (Delmark 848). It's a 16 tune extravaganza of Chicago and beyond blues headed up by the exceptional harp of Pierre Lacocqoue. Inetta Visor is the main vocalist and she can dish it out. She is seconded in the voice department by Michael Doton, who is also the fine guitarist soloing on half the cuts, then there is a vocal appearance by Giles Corey, who is the other main guitarist in the mix.

To such a solid core of singers and instruments we add sax, keys, drums and bass and get a soul-blues spectrum of genuine syntheses between classic past and very alive present.

They run the gamut on the album from hard popping funk blues to boogie, slithering steam to down-on-it heaviness.

They manage to get the grooves going on true-to-self numbers one through sixteen, inclusive. It's one of those albums that looses none of the power of the classic forms yet finds ways to avoid a simple clone. Fresh is the word!

An excellent band in a terrific new album. I cannot imagine you would be disappointed with  this one. Not, that is, if you expect the real blues, something that measures up to the greats yet speaks to today.

Oh, yes it does.
Posted by Grego Applegate Edwards at 6:39 AM