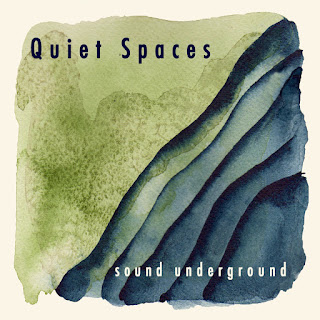 If you have a similar background to me, the first thing that hits you in listening to the trio Sound Underground and their album Quiet Spaces is their apparent rootedness in the classic later-'50s Jimmy Giuffre with Jim Hall and Bob Brookmeyer. There is a chamber jazz approach in common. The instrumentation of Jonah Udall on electric guitar, David Leon on alto sax, and Alec Aldred on trumpet involves a similar openness of execution, with Jonah pivoting between chordal work and a third voice.

The compositions (by all three trio members) have a kind of genetic relation to the Giuffre classical-folk-jazz nexus. They are notable for their structural bent and memorability.

And the improvising schemas are well thought out like the Giuffre three-some's were.

But foremost in this is despite the genetic relationship the music does not really sound at all like Giuffre's did in those days. That's because it is so many years later and also because all three follow their own muses.

Put all that together and you have something very nice indeed. Check this out!
Posted by Grego Applegate Edwards at 7:10 AM