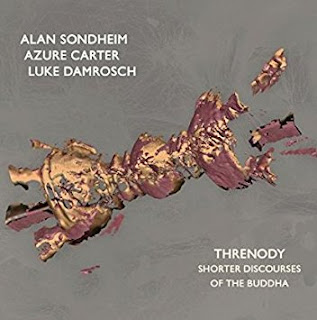 It is always heartening to hear an artist who long ago made a heroic gesture in the earlier new music free jazz world still active and moving forward in an ever-expanding personal expression. I speak of Alan Sondheim, who in the earlier and perhaps more heady days of new free music making put out several albums on ESP that might qualify as some of the most daring music you've never heard. Not daring in a drop-your-drawers astonishment sort of way. More like an unpretentious refusal to recognize boundaries. His multi-instrumental essays still enlighten, still bear close hearing today.

The three gather together to create in the Sondheim vision a free pan-world music that through its multiple gestures and referents builds a new sort of sonic world. In that way everything Sondheim creates is another "New World Symphony" if you will.

This new effort is as good or even better than what has come before. It gels cohesively through the magic of deliberate disparity, like a mole sauce, a seemingly odd concatenation of chile and chocolate that thrives through its very melding of sensual opposites. Like that.

Highly recommended for you musical undergrounders.

Posted by Grego Applegate Edwards at 7:15 AM