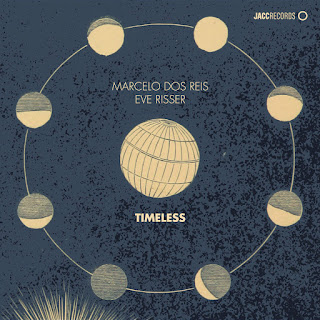 Guitarist Marcelo Dos Reis has been involved in some wonderful improv sessions in recent years. For that matter so has pianist Eve Risser. A duo of the two turns out, understandably, to be an inspired idea. We can hear the results of their intersective get together at the October 2016 "Jazz ao Centro Festival" in Coimbra, Portugal on the recent CD Timeless (JACC Records 34).

The idea of conjoining both prepared and unprepared piano and acoustic guitar alike is given very creative focus in the seven free improvisational segments that make up the program. Marcelo and Eve attend closely to the very expanded sonarities possible in such a setup. They allow their creatively inventive selves full latitude to get the maximum  of ethereal traction out of the possibilities inherent in what end up being four instrumental options. Of course the many sound possibilities of the two prepared instruments are what you notice first coming out of your speakers. Then with continuing listening the entire spectrum of sounds and the gestural interactions become ever more clear and compelling.

The music is as much about the timbrally exotic flourishes as it is about pitch. The two aspects combine in ways only avant improvisational savantes like Eve and Marcelo could pull off. Nothing sounds random or accidental. And none of it is because these two know well what they are about. They know which parts of their articulation arsenal will correspond with what the other is doing at any given moment.

So each moment of the totality has significance and aesthetic expressivity. It allows the duo to open us up continually to fascinating and rewarding open universes of sounds.

Timeless puts time on hold, as the title suggests. You listen outside of the clock watching being we tend to be when everyday life is in its more mundane phase. The musical events of Timeless sacralize the sound-art space we dwell in and leave us with boundless soundscapes of focused beauty and character. And it does so with disarming selfless individuality, with a dual creation of real value.

Get this one and prepare for parts unknown! Timeless captures timbral wonders as it takes you away from anything ordinary. Molto bravo!
Posted by Grego Applegate Edwards at 7:11 AM