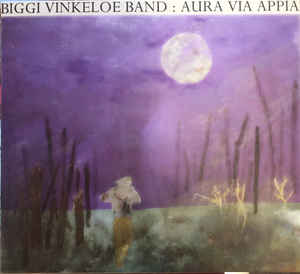 Melody, song and freely stepping forward are central to the beautiful album by the Biggi Vinkeloe Band, Aura Via Appia (Omlott MLR 015 2017). It centers on the presence of the band in Rome, on the singular feeling that evokes, a songfulness, a singular directionality brought on in part by being there, or so I would suggest.

The band itself has presence. It centers around of course Biggi on flute and alto, Robert Bellatalla on double bass and Peeter Uuskyla on drums. Joining them is Nema Vinkeloe on well done vocals and violin for the two Swedish folk songs and Pharoah Sander's wonderfully familiar "Japan." Simon Uuskyla nicely brings his voice to the two versions of Mozart's "Un Aura Amoroso" and his "Speculum Dianae".

This is music that sings, and to me that is always a big part of Biggi as an artist. Her alto and flute are ever singing, as they very much are here. The entire album however does embrace a singing of a singing, in the Mozart, in the folk songs. There always is a kind of discursive logic to Biggi's soloing, a speech-song quality. And we get lots of nicely hewn Biggi here, as good as anything and that is very good indeed. The band has open forward free movement that sets Ms. Vinkeloe into a space where she can shine brightly. So she does. And the song moment only bring that to us as a reinforcement, an affirmation.

Aura Via Appia has a gentle, open joy about it. We sing along in our hearts, because the music cannot and should not be denied. You listen the more, the better it gets. Kudos to Biggi and the band. Listen to this!
Posted by Grego Applegate Edwards at 6:59 AM