Eric Revis, Sing Me Some Cry 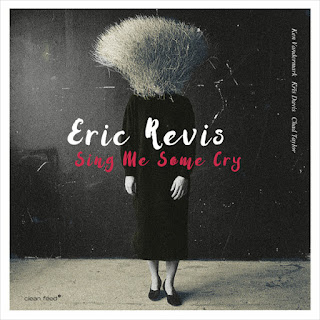 Anyone who reads this column regularly should be familiar with Eric Revis. He is a new jazz freedom bassist, composer and bandleader whose music has been addressed in several review articles over the years. We come back to him happily with a recent release of his entitled Sing Me Some Cry (Clean Feed 428).

The album features an excellent quartet in Revis on bass, Ken Vandermark on tenor sax and clarinet, Kris Davis on piano and Chad taylor on drums. All four have a hand n the compositional frameworks, with four of nine by Revis, one each by Vandermark, Taylor and Davis, one by Adam Rogers, and one a collective quartet venture.

The frameworks set up some cutting-edge improvisations by the foursome, who are rooted in the music yet determined to move forward. Each is an important voice on her or his instrument. And at the same time there is a pronounced four-way confluence to be heard.

Perhaps most impressive over the last few years is the emergence of pianist Kris Davis as a central and cogent contributor to a good number of fruitful sessions. She is a central voice here as well. Eric bears close listening too for his bass smarts. And really there is centrality to all, though Vandermark and Taylor one always expects over the years to make important contributions to whatever date they are on. That is very true on Sing Me Some Cry.

In the end one is struck by the vibrancies of the frameworks as well as the cohesive movement of the improvisations. There is individual and collective totality on all nine pieces.

There is every reason to check this music out if you want to know what is new about new avant jazz. It is a bright moment on a continuum of continual effervescence out there. Grab it and spin it and you'll no doubt get it!
Posted by Grego Applegate Edwards at 7:11 AM