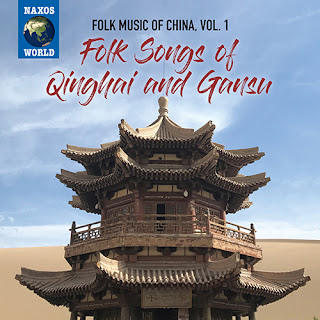 The Naxos World label comes through with music of regions not as familiar to non-local listeners, namely Folk Songs of China, Vol. 1: Folk Songs of Qinghai and Gansu (Naxos World NXW76088-2). We hear unaccompanied vocal renditions of songs sung by ethnic minorities from the tribes of Tu, Bonan, Dongxiang, Yugur and the Salar. That fact along makes this release notable.

As far as the experiencing of the songs goes it is in the nuances that we gain insights I feel after listening a number of times. Yet too there is a visceral homespun quality to it all that disarms and puts the listener in a new place, so to say.

Several song types are represented. Hua'er  has to do with the young lady lovers of young men. Western Yugar styles appear as well, in long epic forms and shorter ones. Then there are Yanxike, or banquet songs sung ordinarily at weddings. Salaqu or Yu'er are songs of the Salar peoples and ordinarily utilize the pentatonic scale. Finally we hear several songs from the Dongxiang.

Understandably the music sometimes differs from what a Westerner might think of as typically Chinese. And so it adds to the vast folk wealth we can experience for ourselves these days and therefore is a valuable addition to one's folk-ethnic library if one is predisposed in this way. Fascinating.