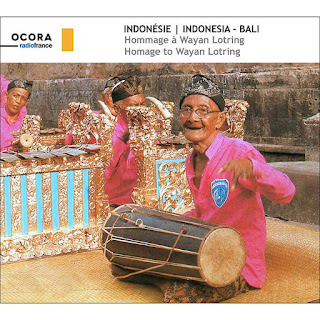 A retrospective of a master composer and musician of 20th century Balinese Gamelan music is at hand and a fine thing it is. To give it its full title, it is Indonesia - Bali, Homage to Wayan Lotring (Ocora C582076/77 2-CDs). It is an intriguing compendium of some 15 Lotring works--nine for full Gamelan orchestra, plus three specifically for Legong Kraton and three for Gender Wayang.

Those who have sampled a good bit of Balinese Gamelan over the years have undoubtedly heard Lotring works without necessarily being aware, for he was in many ways the "Beethoven" of Gamelan for the important first half of the 20th century, having a long illustrious career on the island. Born in 1898, by the '20s he was a fixture of Gamelan and by the '30s his fame had spread beyond (thanks in part to Colin McPhee's writing) to general musicological Gamelan acolytes of the age at large abroad. And he kept moving forward for a long life of accomplishment.

When appropriate he wrote music and created the dances for the music simultaneously. His first works were for the Gender Wayang chamber groups that provided Shadow Puppet backdrops and pieces often centered around Hindu sacred topics. He then went on to compose for full Gamelan orchestras with dedicated dancers for each work. And of course he also wrote works that were meant to be performed with the orchestra alone.

What strikes me over the years with Lotring's music is the sheer beauty of the main melodic underpinning in the context of incredibly lively figuration in the metallophones. Tempo changes, really stunning, tantalizingly brief grooves and unexpected shifts in the musical momentum give us an incredibly rich tapestry that unfolds memorably in each of the exemplary pieces on the program.

These are "authentic" field recordings and so one might hear, say,  a baby crying or someone coughing in the background every so often. But the sound is very good and the performances excellent so one should not care about such things.

I would say that this set is essential for anyone seeking to experience some true milestones in the Gamelan arts. Lotring's music is central and the set maps out some very wonderful examples for us to treasure, beautifully played. Strongly recommended.
Posted by Grego Applegate Edwards at 4:24 AM