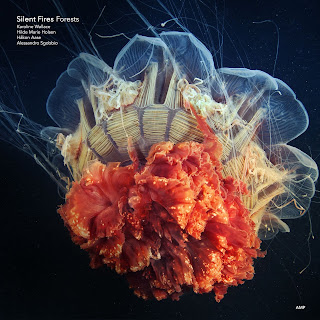 The ever smaller typefaces used in modern graphic design make us squint, or me anyway. The Silent Fires album Forests (Amp AT058) has that sort of look and as elegant as it is it graphically whispers a name that might the better be shouted to the heavens? This album is such a pleasure to hear that I more feel like shouting praise than squinting.

It is Karoline Wallace on vocals, Hilde Marie Holsen on trumpet and effects, Hakon Aase on violin and percussion and Alessandro Sgobbio on piano. The eleven numbers here come from the pen of Sgobbio and there clearly is improvisation at hand as well, the most notable of the latter especially from him.

These are song-like and songful reflections with a built-in makeover of some of the atmospherics of the classical ECM Jazz that became especially influential towards the end of our last century. It is open-form music with musical objectives, signposts that all realize at times, part of the ensemble at others, with the vocals a central focus along with implied, inherent song form.

Sgobbio's piano playing is a luscious thing, searching, advanced yet always thoughtful and impressionistic. Vocalist Karoline Wallace has a clear, sweet. pitchful-wispful voice that does not remind of Astrud Gilberto yet has some of her sweetness in abundance for sure.

Hakon Aase's violin tends (to my ears) more often to appear in an improvisational commentary role than does trumpetist Hilde Marie Holsen but both add much to the ensemble when they are present, for color and substance.

Put it all together and there is a consistently magical spirit-music going on, wall-to-wall. Not cool so much as poem-cavernous, this is. It is sweet but not stickily, sickeningly so. Far from it. Wallace and Sgobbio strike it off with a remarkable chemistry the others second and forward.

It a word, beautiful. This is one outstandingly beautiful recording and Silent Fires deserve acclaim for it. A big bravo, very big.
Posted by Grego Applegate Edwards at 7:04 AM