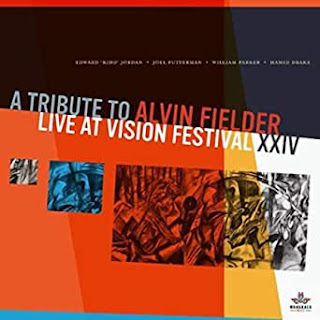 Alvin Fielder (1935-2019) was an important and influential drummer, a pioneering charter member of the Association of the Advancement of Creative Musicians (AACM) in Chicago as well as the Black Arts Musical Society. He was an essential force on Roscoe Mitchell's first album, played and recorded with the Improvisational Arts group with Kidd Jordan, appeared with Ahmad Abdullah, Charles Brackeen and Dennis Gonzalez, gigged with Joel Futterman and Andrew Lamb, and etc.

New York's Vision Festival XXIV in the summer of 2019 honored Maestro Fielder in memoriam. Happily it was recorded and released last year as A Tribute to Alvin Fielder Live at Vision Festival XXIV  (Mahakah Music CD 086, Digital DL at Bandcamp). It is a lively gathering of four artist colleagues, friends, collaborators with Fielder over the years.

So we have Kidd Jordan on tenor saxophone, Joel Futterman on piano, William Parker on contrabass, and Hamid Drake on drums. It is one continuous set, a free improvisation lasting 45 minutes.

Everyone sounds motivated, committed, filled with ideas and mutual flow. Though Kidd Jordan was no "spring chicken" when he took the stage with the quartet, he was totally on the case, warm, post-Trane in depth and ideas, fired up. Joel Futterman's piano playing too is lucid, slam bang on top of the world, filled with ideas that combined well with the others.

William Parker as always has energy, fire and note-choice smarts that firmly anchor everything with immense strength and imagination. Hamid Drake is a firebrand throughout, putting in one of his very best mid-sized group wash performances of explosive drive.

In short this is a fabulous set you may well want to hear frequently. Strongly recommended.

Posted by Grego Applegate Edwards at 9:27 AM