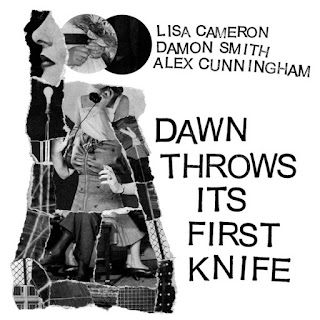 A year into the pandemic and it is still far from an ideal world for music and music making but that does not negate its centrality for those that are called to make it, talk about it, hear it, live it.

So today an album to consider, something available now in the realm of Free Jazz, by Lisa Cameron, Damon Smith, Alex Cunningham. It is entitled Dawn Throws Its First Knife (BPALTD 11811). It has a serious and creative ring to it all.

Of the three artists in this trio Damon Smith on double bass may well be the most familiar to you. He is a master of free bass extended technique and poetics, both pizzicato and arco and has a sizable discography and an impressive series of interactions with some of the avant improvisational greats. Go to my Gapplegate Guitar and Bass Blog and type his name in the search box for a number of reviews of his releases. For this trio date he is nicely himself, adding a good deal to the three-way dialog at all times.

Alex Cunninghan is a violinist and visual artist based in St. Louis. He shows a great range of sound color on this album and a good deal of aural imagination. Lisa Cameron is a drummer new to me, but shows herself to be a extraordinarily sensitive artist who listens carefully and responds with soundings that help propel the music forward in ways that put everything in continuous gear and give us a kind of all-over continuity of timbral variation without overtly swinging.

Indeed the three make rewarding sense out of the challenge of total freedom as a remarkably close knit trio that doew not so much try to produce torrents of applause but rather to bring an inside introspection to an outside spontaneous expression of great subtlety. This is the sort of improv which does not draw obvious lines backwards into Jazz history so much as it uses the idea of the Jazz trio to remake the music anew.

As one listens one finds oneself getting increasingly drawn into the musical dialog. That is perhaps the ideal situation for the listening--a music that sounds better with each repetition. There is much to appreciate in this program. Congratulations to all three for giving us this specially lucid free immediacy! Very recommended.

Posted by Grego Applegate Edwards at 10:43 AM