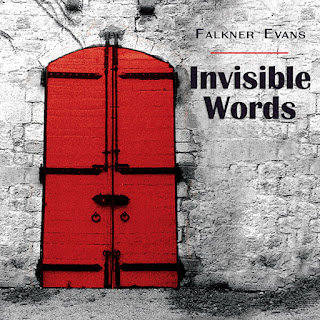 When listening to new music we all have some set of expectations. Sometimes when it is something we did not expect, we can get hung up on that and maybe neglect to value what it IS. I think those thoughts as I listen to Jazz pianist Falkner Evans and his album Invisible Worlds (CAP 1070). It is a solo piano set played as a kind of tribute to his late wife who passed in tragic circumstances in May of 2020. It is a kind of working through of his sense of loss but also a kind of snapshot of who she was for him. warmly so.

It is music with a compositional but also an improvisational aspect, so it seems to me. It thrives on the sort of basic Jazz, Bop-and-after  assumption of a chordal left hand and a right hand for melodic passages and runs. The album begins and ends with versions of the title cut, which ravishes and stands out while it sets up the listener for the six other sequences we hear with interest.

While I was searching for a cover JPEG on line for this review I stumbled on some critical commentary on him and on this album. He is like Bill Evans, somebody says. Well, yes he shares with Bill a highly evolved harmonic sense, and the sort of poetic stance of "Peace Piece."

But if you expect to hear technically demanding soloing you might put that aside and just listen. It is not a matter of a right hand that comes across as horn-like in a post-Bud way. The compositional and improvisational elements are very musical and beautifully wrought but not a vehicle for virtuoso intensity. There is rather a mood that is balladic and introspective all the way through. Now what matters here is that he sculpts it all with care, with musical intelligence and feeling, something richly inventive as a whole.

It is a moving portrait of his wife and some of the most harmonically brilliant music I've heard lately. Approach it on its own terms and think of a twilight world of remembrance and you will doubtless get the feeling of a pointedly articulate harmonic expression that one does not often hear in such a context. Brilliant!

Posted by Grego Applegate Edwards at 10:18 AM