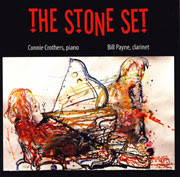 Pianist Connie Crothers is back with another nice offering: The Stone Set (New Artists 1044), a two-CD volume of duets with clarinetist Bill Payne. The first disk captures the two playing a set at NY's The Stone, 2009, probably the premier venue these days for what's important in new jazz and free improvisation. The second disk, Conversations, covers another session of the two playing in Connie's loft in Brooklyn.

It is a chance to hear the two interacting with an open-form set of improvisations. Bill Payne favors cleanly articulated, almost classically pure clarinet sounds that fall into a "new music" hybrid between jazz-based improv and avant classical freedom. He reminds every once in a while of Rolf Kuhn, then, no, he reminds of nobody but himself. Ms. Crothers responds with some of her finest open-framework improvisations to date, corralling all her pianistic textural, harmonic and melodic spontaneities to the interactions at hand.

It's rarified, high-road modernism and it's a model of creative interaction. Connie Crothers, as I've asserted in an earlier review, is an important force in the music today. Her many years playing this music have allowed her to dig ever deeper into her fertile musical imagination and express it all with superb musicianship. And she has found an able and fully compatible collaborator in Bill Payne.

Kudos!
Posted by Grego Applegate Edwards at 5:22 AM