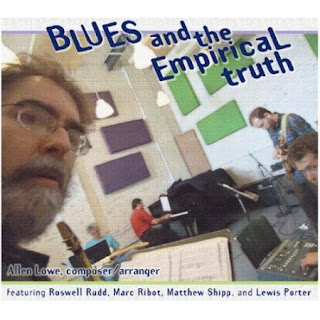 Allen Lowe is a provoc- ative, original cat. He has strong ideas about the music, its history and his place in it. Now up in Portland, Maine, spending time working on some comprehensive musical anthologies and no doubt occupying more than one brown study thinking about it all, he re-emerges with a heady three-full-CD set devoted to the Blues and the Empirical Truth (Music & Arts 1251).

First off, there is a great deal of music to digest. It doesn't hand you the blues in some predigested, predictable way. This is music of a rawness and vitality and a music that is willing to bend and even break the blues to fit a new re-situation. Sure there are 12-bar forms that get fairly strict adherence, but there are any number of compositions with varying degrees of looser approaches that continue to utilize one or more blues elements, the cry, the blue notes, the wailing bends, and harmonic stretchings. It's all blues-y certainly, but it does not adhere strictly to rote bluesrendering all the time. And this is a good thing.

What more or less serves as a continual presence is Allen Lowe's alto-tenor of fire and his compositional-arranged imprint. He in effect emigrates the blues to various landscapes. You get Allen's version of New Orlean-jazz-blues, preblues roots, Ornettian blues connotations, folk blues, urban blues, Bessie-Ma-songstress blues, rock blues, skronk blues, McLean bluesnikian derivations, Bird rechannelled and lots more, all harnessed to pull the Lowe carnival of sound. He's surrounded himself with a shifting set of heavy cats: Roswell Rudd, Matthew Shipp, Mark Ribot, and others. One controversial move is to place Jake Millet on electric drums. Jake gets a wash of cymbals and tubby drum sounds that have a sort of noise-envelope like you would hear on swing-bop 78s, less the dropping of bombs per se. But it situates the music in ways that are meta-commentaries on the various historical styles. And in many ways that is what this is all about. A modern, out view of the blues as an organic whole.

Does it work? Yes, on all fronts. Even on the rare occasion where it all seems on the brink of falling apart, it doesn't, but rather pushes the music to the edge of coherence, which I find rather cool. Everybody contributes, but it is Lowe that stage directs and sets the tone. It's a creative representation of blues in its essence: music that has raw immediacy and goes well beyond strict adherence to mechanical form.

It's a lot to digest but there is nothing un-needed or superfluous.

A kind of out-blues tour de force is what it is. Recommended!
Posted by Grego Applegate Edwards at 5:44 AM