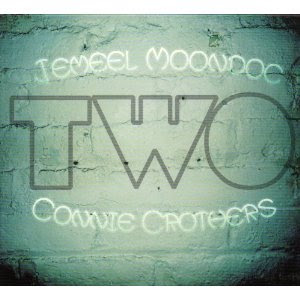 Two (Relative Pitch 1009) pits Jemeel Moon- doc's alto with Connie Crothers' piano, recorded live at Connie's Loft in 2011. Good free explorations are what you would expect, and that you surely get.

Jemeel's post-bop outness shows strong roots here, transformed, and Connie's rootedness comes through a little bit more than on some of her other recent collaborations. What is nice especially about that (and what in part distinguishes the set) is that neither are looking back. They are continuing their movement forward into new avant freedom. It's just that the past figures as reference point a little more from time to time than perhaps on some other recordings lately.

There's even a song . . . or two. Jemeel's "You Let Me Into Your Life," for one, with a harmonic-melodic base which they launch off of. Connie's "Deep Friendship" isn't as much taking on song form, but it has compositional guideposts that serve as the basis of a free salvo.

This is the first time the two have recorded together and that turns out to be an auspiciously good thing. Both bring their "A" game, not that I have heard either in a "B" mode. They do what two improvising masters do best when engaging in spontaneous two-voiced interplay: to respond to each other's uniqueness with the uniqueness that is their own and in the process create something not quite the same, intermelded twoness, as what they might have done by themselves or with any other possible twosome.

They have mutual brilliance and the shining that comes about is that much better in tandem, like the earth if it had two suns and it was a beautifully sunny day. Like that.