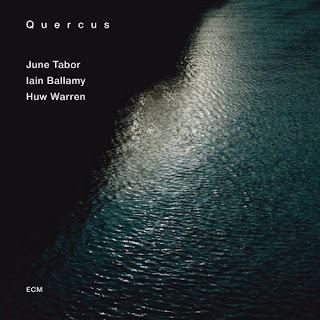 The world of the ECM sound has never been an entire strang- er to folk music. Garbarek has done some things with Norwegian folk melodies and others too, for example, but it is not entirely typical for the label.

So when vocalist June Tabor, saxophonist Iain Bellamy and pianist Huw Warren begin their album Quercus (ECM B0018267-02) with an old Robert Burns lyric set to a traditional folk melody, and they do it with a folk purity yet an ECM ambiance, one's ears perk up. The rest of the album weaves in and out of old English folk worlds and tuneful ECM extensions, and then dips into a songbook standard and things contemporary-timeless. One feels transported.

June's voice is lovely in the way Sandy Dennis used to sing when she did the way-back songs; there's something tender and real there. And Ballamy's sax and Warren's piano ECM-ize it all with their own version of the lyrical sound. Warren sometimes sounds like he's playing a folk harp, yet he isn't. Other times he soars with articulated ECM soulful classicism. And otherwise he gives out with his own purity. The same applies to Ballamy's sax obligattos and solos. He does not sound like Jan Garbarek, which is I suppose a feat in itself once this sound opens to the air, but the tenor has its own post-Trane purity too.

This is marvelous music. It's so good it makes you wish you were not here, but back in some timeless folk past. And yet the music is both back there and right here. What could be better? Recommended.