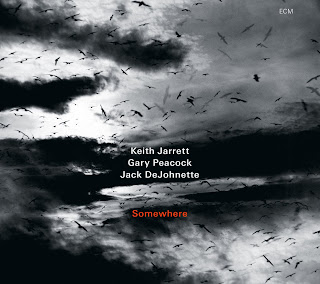 Can it be possible that the Keith Jarrett Trio is becoming the most long-lived jazz group of all? They have been Jarrett-Peacock-DeJohnette for more than thirty years now. They are passing the MJQ or at least equaling them for longevity. It didn't seem like it was going to be that way when they made that first record of standards so long ago. But here we are and their new release Somewhere (ECM 2200) is with us. It's the three holding forth live at KKL Luzern Concert Hall in 2009, and they are in great form. Seemingly gone are the days when Keith's illness was a energy-technical-inspirational-limiting factor.

It's all back and it's still evolving. They do standards, of course. And they do them with the maximum flexibility they are known for and excel at (preposition endings nonwithstanding). There is the reappearance of the avant in Keith's playing, especially in the "Deep Space" unaccompanied prelude that begins the set, there is the mad bebop forays with brilliant lines cascading from Keith's fingers and imagination, there are the excellently subtle Peacock bass solos and ensemble work, and Mr. DeJohnette does wonders as he has for so long.

There's a two-chord vamp that extends "Somewhere" into the territory of the trio in their open mode. And there are simply beautiful re-harmonizations and re-expressions of some wonderful songs. All moving toward regions beyond, re-energized. So the travel continues.

This one is quite lovely--one of the best in recent years. Not that they've gone away at any point, but surely they are back with us in full force. Recommended!