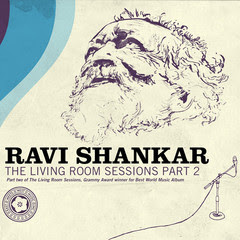 A titan has fallen. Ravi Shankar is no more. The Living Room Sessions Part 2 (East Meets West Music 1009), I can only assume, will be the last album planned and executed by Ravi during his lifetime, so it is in that sense his farewell to us.

I could fill many pages with how his appearance changed the course of Western Music and Western Culture. I will not do so today, except to say that his influence has been enormous. If today there are many here in the US who have become great appreciators of the classical Indian music tradition, if South Asian musical form has had great influence on both art and popular musics over the years in the West, much of that has to do with him.

And of course as an extraordinary composer and sitarist he has excelled and done much to extend ideas of form and to innovate with elements not ordinarily brought together in traditions of North and South India as well as with western elements. All this he has done. But it was primarily as sitarist brilliantly performing raga with tabla and tanpura that we first encountered him here and so it is perhaps fitting that he takes his leave of us in this way.

Part 2 continues where Part 1 left off, Ravi Shankar in the comfort and informality of his own living room giving us extended raga performances with talented tabla master Tanmoy Bose.

As in Part 1 the alap and mid-tempo portions of a raga performance predominate. Ravi was at this point somewhat frail and so mostly shies away from displays of technical wizardry that were a usual part of a performance in earlier years. We get some very absorbed and profound meditations from Ravi that make up for it, plus some gats (compositions) that stay in the mind. He sings effectively and briefly in the Sindhi Bhairavi performance what may be a part of a bhajan (devotional song) that then serves as a gat. He dampens the strings for a time and he sometimes repeats a motif to engage in more purely rhythmic interplay with Bose, and at one point makes of the sitar a drum, playing one note in various rhythmic articulations.

In the end, Ravi is having a great time here, as he enthusiastically exclaims at the end of the last track. And along the way he gives us some engaging and profound last thoughts, musically speaking. He takes liberties and operates in a free zone for much of this CD. It gives him joy and that joy is contagious. We are grateful for a lifetime of devotion and genius. We now say goodbye to his earthly presence. His music will live on. Thank you so much.