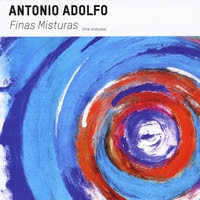 Finas Misturas (AAM 0705) involves a cohesive, meaningful blend of the Brazilian and jazz. Pianist-songwriter-bandleader Antonio Adolfo has drawn upon his many years experience in both worlds to create a program of four nicely turned Adolfo originals that find themselves in juxtaposition with six jazz classics, by Dizzy Gillespie, John Coltrane, Keith Jarrett, Chick Corea and Bill Evans, nicely arranged as a fine blend of Brazilian and jazz flavors.

The instrumentation can go as large as a sextet or less for more intimate arrangements. Here we experience the commingling of jazz and Brazilian with players who embrace both currents and make the arrangements happen.

Adolfo plays a rhythmically, harmonically and melodically sophisticated piano, an important exponent of the dual heritage as it has worked out in the music. Tenor/flautist Marcelo Martins has absorbed the Getz through Trane and Farrell lineage that forms the building blocks of the style, and made it his own. Acoustic Guitarist Claudio Spewak brings the subtle bossa comping chordal style along with a solo style that has beautiful tone and thoughtful note choice as its goal. He succeeds well. The rhythm section cooks nicely in samba jazz fashion.

The Adolfo originals shimmer in a setting where the classic jazz pieces are made to open up to Brazilian rhythm and creative harmonic articulation. So we have nice versions of "Con Alma," "Giant Steps," Jarrett's "Memories of Tomorrow," "Naima," "Crystal Silence," and "Time Remembered." The rubbing up against one another of classic modern jazz pieces and Adolfo originals holds together in ways that make Adolfo's music seem equally valid and cause the mind to toggle with the various elements in both realms as they coincide or sequence together.

Throughout Adolfo sounds great, the other soloists shine, the rhythms and harmonies pop. It's a fine outing for all and will mellow the harshness of the most world weary without sacrificing the musically substantial aspects of Brazilian jazz. That is a trick the best Brazilian player-writers know to perfection and Antonio Adolfo is one of the very best at it.

Grab this one for a beautiful synthesis, like a fine wine, fully matured and filled with subtle nuances of the senses. Antonio Adolfo blends finely indeed. This one's a winner!