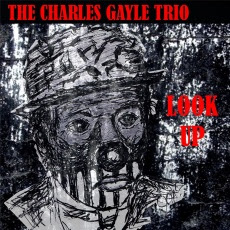 At what point is the incandescent sax work of Charles Gayle, as far as recordings go, enough? I only say this because the initial period of his ascent into the free jazz firmament has a consistency of outlook and execution that, once encountered, begins to sound similar from release to release. A new one, the Charles Gayle Trio's Look Up (ESP 4070) has been out for a little while and listening to it at length gives me a deja vu feeling.

It's a live date from Santa Monica, 1994. The band is an excellent one: Michael Bisio on bass and Michael Wimberly on drums. The sound is good, except Maestro Bisio is not entirely audible in the ensemble onslaughts. He has some nice unaccompanied moments however to make up for that. Wimberly is dynamic free heat throughout, pushing and prodding Gayle forward. Gayle himself is ablaze with Aylerian explosivity, pitching forward with the no-nonsense freedom that brought him to our attention with force in those days.

I guess if there is a point where we look for movement in his music (which we certainly get on his piano dates), this was not the time for him to give it to us, as he was still establishing the full-throttle presence and legendary persona-come-into-the-fray that brought such initial acclaim. He sounds anything but predictable here.

The set is marred slightly by a eight-minute verbal explosion Gayle throws at us to a free tumbling backdrop. It's angry, it's non-stop and it takes the form of an old-time backwoods sermon on "homosexuals," "fornicators," people who smoke, murderers, intellectuals and other variegated undesirables, and how they cannot listen or understand Dolphy, Trane, and etc., until they embrace the father, son and holy ghost. That seems to be the gist of it. If it's how he felt at the time, so be it. It does seem a bit extreme and the level of anger perhaps slightly mystifying. Not that he doesn't have the right to be angry--it's what he chose at this point to be angry about that I don't quite get. Quite obviously this is about the kind of gospel sincerity Ayler came across with towards the end of his career. Here it less convincing and, truth to tell, on repeated listens annoying.

The rest of the album is aces, though. At what point is enough of this period enough? Perhaps not yet, depending on how many recordings you have of '90s Gayle. This one has lots of heat and a crack team of Bisio and Wimberly to egg Gayle on. So it's mostly very nice to have.