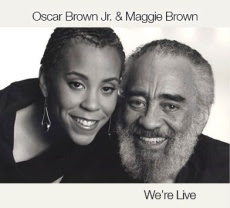 Oscar Brown Jr., who passed in 2005, was one of America's premier jazz vocalists-lyricists-songwriters. He is captured vividly in tandem with his formidably singing daughter Maggie in a live gig recorded in Chicago sometime in the later years, when he didn't get too many record offers because of his political leanings. This is previous unreleased, first-class Brown. We're Live (ESP 4071) pits Oscar, Maggie, and another daughter, Africa Pace Brown in a cameo vocal appearance, with a solid piano trio of Miguel de la Cerna (piano), Yosef Ben Israel (bass) and Avreeyal Ra (drums).

The set gives you a widely encompassing sampling of the Browns's hard-bopped vocals, including a lyricized version of "Billie's Bounce" and other Bird classics, "When Malindy Sings," originals and some blues, all done with distinction.

Whether you are a Brown enthusiast and have most or all of his sides, or are new and seeking out a good sample of his music, you'll be well-served by this one.