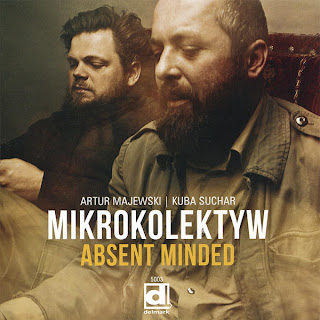 I believe it would be just about impossible to make the sort of music the duo Mikrokolektyw thrives at and make a living by it here in America. It's too good, too advanced, too electronic and too out there in a combination that doesn't ring bar cash registers. I could be wrong. They are stationed in Poland so thankfully they don't have to face months and years trying to get an economic flow going here.

And I say all of that by way of a complement. We need music people don't know they need to hear at first, music that breaks barriers and combines things in ways that are "forbidden."

Well that, to my mind, is what I especially like about Mikrokolektyw. They have a new album out, Absent Minded (Delmark 5003), and it takes things a step further. The duo consists of Artur Majewski on trumpet and cornet and Kuba Suchar on drums and percussion. They both fashion the electronic backdrop, the wash of MIDI-live ostinatos, drones and third-voice musicality that they play so effectively over.

This new one is even freer than past efforts. It's tour de force mood freedom, with excellent improvs by the two and atmospheric electronics laying a carpet of sounds behind them.

They are so unique we are starting to hear imitators. But let's not go there right now. What's important is that these are very musical minds at work, two expressive spirits that need to be heard and so you should listen to the new album--and of course buy it. That's the point for the survival of such things!

Posted by Grego Applegate Edwards at 7:24 AM