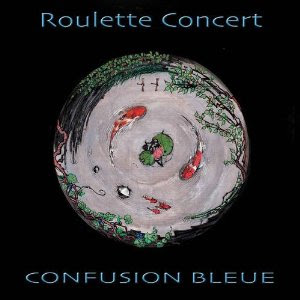 Confusion Bleue is the collective effort of four talented improvisers (three plus guest), an exacting live-mix sound man, plus you, the listener. Specifically there is Nobu Stowe on piano and electric pianos, Ross Bonnadonna on electric and acoustic guitars plus alto and bass clarinet, Ray Sage on drums, Lee Pembleton on sound, and for the album at hand, Roulette Concert (Ictus 165), guest Chris Kelsey on soprano.

The album was made in the course of a gig at the Roulette in New York, 2010. Hence the title. There are four fully improvised sequences, the third based on Miles' "Blue in Green."

That having been said, let's turn to the music. What to say? There is excellent rapport throughout. Nobu Stowe is an all-encompassing presence, running the gamut from post-Taylor fanfares to wildly inventive chromatic extensions, outly dissonant rock riffing and undulating, driving tonal tangents. Chris Kelsey is blazing it up whatever is happening. He is fired up and letting it all go on this set. Lee Bonnadonna plays some very effective guitar in an in-and-out zone. He will give you a second voice with his reedwork as well, though I find his guitar playing the main attraction. And Ray Sage is hitting it with tumbling smartness and cooking looseness.

This is a very able and flexible outfit. They are captured on a good night, too. The "Blue and Green" improvs break up the set with unexpected tonal freedoms, even a little Bachian counterpoint before a burlesque of good humor. It all makes the time fly on the ear end.

One thing I like about this band that night is that they let themselves go without reservations, even if it ends up in stylistic territory not expected of "free" players. They go wherever it seems right at the moment and so you get combinations you might not expect in avant jazz. But then they do the "purely out" with dedication and fluidity to satisfy the "heavy energy" cravers (like me) fully.

As I listened over time I was reminded of the "wherever it needs to go" resolve of a Dave Burrell. This band has that sort of ranginess.

So it's good to hear this one. Creativity cannot and will not be suppressed! This evening at the Roulette was anything but (supressed, that is). Great sound. And fun, too! Bravo.

Posted by Grego Applegate Edwards at 1:08 AM