Kahil el'Zabar Quartet, What It Is 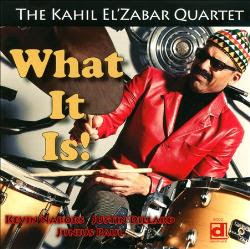 Can you believe that Kahil el'Zabar has, with and without his Ethnic Heritage Ensemble, released something like 58 albums to date? That's what I read and I am not really surprised because he has done it for years. Still that is an achievement.

So here he is with quartet and a new release, What It Is (Delmark 5002). This is an organ combo more into a post-Larry Young than post-Jimmie Smith thing because the modern post-Trane, post-Pharoah sound is there along with some of the Afro-Jazz elements Kahil has favored over the years. There are also the tribal grooves going, and more late-Trane fire when the organist switches to piano.

Justin Dillard mans the Hammond, along with piano and electric piano, and he does well. Kevin Nabors gets into zones you expect on tenor. Junius Paul logs in with ostinatos and general foundational goodness on acoustic bass. And of course Kahil plays some riveting grooves on the drum set (he isn't often given the credit he deserves as a drummer of a very together nature) as well as the African earth drum and the kalimba.

You get mainstays like "Impressions" and "Central Park West," good originals in bluesy groove and African outness, all played with fire and no-jive conviction.

It's another good one.

Posted by Grego Applegate Edwards at 7:06 AM