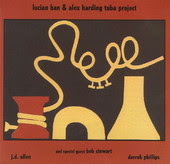 I am shifting backwards for a moment to a recording a few years old that I am only now getting into, that seems worthwhile discussing nonetheless for its virtues. I speak of Lucian Ban & Alex Harding's Tuba Project (CIMP 337), recorded in 2005 and released shortly afterwards. It's a disk I came upon in the course of my tenure at Cadence reviewing music and am finally getting a chance to hear closely in the last couple of weeks.

Pianist Ban and baritone saxman Harding put together an outstanding unit consisting of selves plus tenorist dynamo J.D. Allen, tuba stalwart Bob Stewart and weighty drummer Derrek Phillips. Lucian wrote and arranged all but one number; Alex handled one of his own.

What is striking about the music is the level of performance throughout, which is high. Bob Stewart always is a pleasure to hear in a rhythm team role and he adds great strength to ensemble passages. Phillips breathes drummer's fire to get the band moving. Harding and Allen make an excellent solo front line and Ban adds to it as well. Their collective onslaughts have a Mingusian Blues & Roots coherence and burning consistency. Individually they are formidable as well.

The excellence and execution of the compositions-arrangements put this session in a class of high distinction. It is a model of some good ideas put into play with soul. And the CD sounds just terrific, the bottom rich and nuanced, mids and highs crisp and well balanced.

In short everything was right on this one. It may be a bit of a sleeper but you should take the trouble to seek it out while you can. Many stars for this one, if I gave out stars.

Posted by Grego Applegate Edwards at 3:50 AM