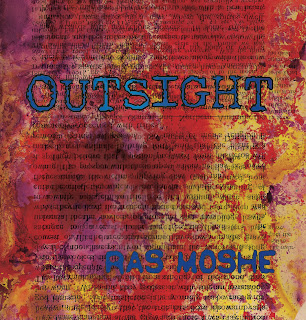 New York based tenor-reed-windman Ras Moshe has been tearing it up for a number of years, though he is not always as well documented by recordings as he should be. So a new album devoted to his music is a particularly welcome event. That is in the form of the full length set Outsight (straw 2 gold pictures) which is available as a download and as a CD as well--online or at DMG.

The album gets off to a kicking start with the modal swinging "I Hear You," featuring Ras on tenor, Tom Zlabinger, contrabass and the always-in-motion drummer Lou Grassi. Ras breaks it up with a firey solo that makes good use of a recurring scalar riff. Tom gets some supercharged tensile walking going and puts it all in gear.

Next up is the suite "Circle One, Two, Three and Four" which features Ras on tenor and a second group of under-recorded New York avant improvisers: Matt Lavelle on trumpet and bass clarinet, Chris Forbes at the piano, James Keepnews on electric guitar, Daniel Levin at the cello, and Dave Miller on drums.

This one flows with collective free variations of the looser and a-temporal sort, everybody getting the chance to blend together around a freely articulated tonal center and some head riffs. Matt has a hard brassy sound, Ras gets full-toned post-Ayler presence with an especially fine lower resonance, Chris Forbes hits it dynamically in a turbulent post-Taylor mode, Levin plays the burning role that ordinarily a bass might in these kinds of out-ings, sounds great and gives the music its underpinning. James Keepnews mixes it up with electric sound colors, some bluesy outness and unpredictable creativity. Dave Miller contributes a very appropriate free-zoned percussion wash. It's a great showcase and a model of the variations-on-variations outward excursions.

The final piece gives tribute to the recently fallen avant tenor hero David S. Ware. Levin on cello and Zlabinger on bass get expressive. Ras comes in for one of his best recorded solos, probing, searching, paying respects.

And so ends an excellent set. If you don't know Ras's music this is the place to start. He comes through with a first-rate outing that does justice to the ins and outs of his attack and shows why he is an indispensable part of the New York avant jazz scene. Everybody puts in effective personal statements and gells together as three separate dynamic units that work it to strong ends. Get this one and you'll be getting a critical piece of Big Apple present-day advancing.