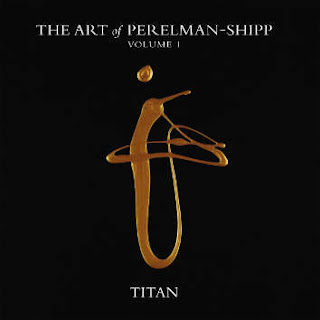 When a stellar twosome simultaneously release an ambitious set of seven  freely collaborative explorations, The Art of Perelman-Shipp, one would do well to take notice. They have been in tandem more than a few times before, with over 30 recordings released in the past several decades. The new set is both a summing up and a fresh trail blazing. I start today with Volume 1, Titan (Leo 794). I plan to cover all seven on these pages. In the widest sense, they remake in musical terms the astronomical reemergence of Saturn in our solar neighborhood.

The first volume features Ivo Perelman on tenor sax, Matt Shipp on piano, and William Parker on bass. This makes perfect sense, in that Parker is a present-day TITAN of free music (as he has been for many decades), and especially associated with Matt as fellow-members of David Ware's pathbreaking quartet and later as a cornerstone of some of Matt's best trios.

The Volume One program is broken into six segments. All are freely invented and very much a living, flowing interlocking of the highest sort. Some of the best moments are relaxed, concentrated effusions of three-fold invention. Other sections gradually build energy and torque. The entire CD finds all in peak form and intent on scaling the higher climbs of cosmic stratospherics.

Ivo now and then reaches back for some vibrato-laced allusions to older jazz modes. Matt and William reference and channel the rich heritage of the music as well, all made present as they then further empty the cauldrons of fire and fluidity.

It is one of those dates where everyone clicks together and inspires each the other to surpass where they plateau  momentarily now and again, then take it a step upwards.

It is an auspicious beginning to the set and fully advanced as an excellent offering that stands on its own regardless of the promise of the six volumes to come. More on those soon. Meanwhile by all means hear this first.

Posted by Grego Applegate Edwards at 6:34 AM